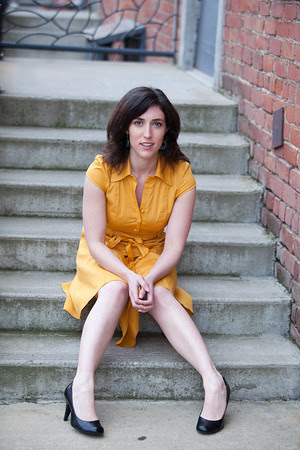 This January the Skylark will be welcoming back the ebullient Kate Willett. Before the year ended I interviewed Kate to see how things had went for her in 2015, and talked about her working with Margaret Cho, the trials and tribulations of stand-up, and her plans for 2016. The interview follows.

Brian: All right, thanks for joining me Kate! You’re very funny, I loved your work at the Skylark when I saw you there last time, and I’m glad that you’re coming back again next year.

B: I saw that you had a show last night, live at the Deluxe? How did that go?

B: Any highlights? Or just another show for you?

K: Well, I mean, I actually perform almost every day, 2 or 3 times actually, so I think people underestimate how much comics perform.

B: Yeah, I bet! Now, do you do anything else, or can you focus entirely on comedy?

K: No this is pretty much what I do at this point.

B: How long did it take for your career to evolve to this point where you could do that?

B: Yeah. Were there any particular lucky moments that you can point towards?

K: Well it’s definitely been really lucky for me that Margaret Cho really liked my stuff and was super lucky to get to open for her.

B: Fantastic. That was actually one of my later questions, you said it was so great to work with one of your heroes. How was it like, meeting Margaret Cho?

K: Well Margaret is an amazing person she’s been really supportive, and she’s a legendary comic, and has been a really amazing mentor to me, I’ve learned a lot from her comedy and a lot from the way she has really been able to marry activism and comedy in her work.

B: Great. I’m glad that went well for you.

B: And you guys still keep in touch?

B: And how did you get into comedy? Did you just wake up one day and say this is what I’m going to do? Was it a calling?

K: I was doing a lot of a theatre and I decided to try stand-up as well and I just really ended up loving stand-up a lot more than theatre because stand-up is so relevant right now, there’s a lot of people who want to go see it. And it’s also cool that you can write and perform at the same time, whereas in theatre it’s usually one or the other. And once I started stand-up I kind of have been doing mostly that instead of theatre.

B: And how did you start getting into comedy? Did you just jump into open mikes? Did you take any classes?

K: Oh no, I just started with open mikes at the BrainWash Cafe.

B: So feminism is a big thing in your work. How do you try to incorporate it into your stand-up?

K: I mean, I think my stand-up is a lot about that. I mean sometimes I will not specifically say the word feminism but my point of view is that I’m a person and that I’m equal to other people and that I deserve the same respect as other people and then all of a sudden a lot of the situations that you’re in as a woman, where that’s not true, and you’re not being respected or whatever, in like sexuality or dating, like the discrepancy between the sexes that you deserve to be treated with respect and you’re not being treated with respect is actually quite funny.

I mean, it’s not just funny, it’s something that should change but humor is a good way to get people to listen to stuff that they wouldn’t normally be willing to listen to if you said it in a straight on way.

B: Absolutely. Coming at it from the side rather than head on?

K: Yeah, it’s not so much that it’s from the side, it’s more that it’s coming at it in a way that people have their guard down a little bit because it’s funny. Comedy, humor, is less likely to provoke a defensive reaction, because people are willing to listen since they’re being entertained at the same time.

B: Would you say you’ve noticed people change their opinions on the subject and take the message to heart? Or do you think it’s more change by a few cuts here and there?

K: I don’t know, it’s hard to know whether it affects people or not but I think that I definitely change their point of view on a few things, and I’ve also had a lot of women tell me that they find my material to be relatable to them or they find they can laugh at some of the stuff from their own life. So you know, it’s hard to tell. But some people have told me afterwards that they appreciate it.

I hope so I guess.

B: Would you say that your style of stand-up has evolved over time?

K: Oh for sure yeah. I think it always evolves for everyone. Hopefully.

B: How would you say it’s changed?

K: I think that over the years I’ve gotten more clear on the things that are important to me and better at expressing them more clearly. I think if you just start stand-up, if you just find something that you think is funny, then audiences will kind of automatically know it.  But I think once you have a bit more experience with stand-up it is easier to write notes about specific things that you really care about, you know?

K: It’s been a really awesome year, I’ve definitely gotten to work with a lot of comedians that I love and that has been awesome; to get to work with comedians when I’m really excited by their work, and I got to do some of my first TV work which has been really exciting, so it’s been great!

B: Any shows you want to promote for the future?

B: Nice! Finally do you have any predictions for 2016?

K: I don’t know, it’s hard to predict what happens, that’s the thrill and anxiety of being a comedian. There’s no saying what’s going to happen.

B: Would it be too presumptuous to have hopes or wishes for 2016 then?

K: Well, you know I think that in 2016 I’ll start putting more time in LA and I hope to do more writing and acting in addition to the stand-up.  I’m also going to be recording an album in April so I’m really excited about that.

B: All right, thank you Kate for having a chat with me!

K: Thanks so much!

You can see Kate at the Skylark, Friday the 8ths at the No Cover Cabaret. She’ll also be at SF Sketchfest, and several other shows, which you can find at her website here.

K: Thanks so much!

You can see Kate at the Skylark, Friday the 8ths at the No Cover Cabaret. She’ll also be at SF Sketchfest, and several other shows, which you can find at her website here.

Brian also blogs on A Cook and a Geek, and publishes parody erotica on The Chronicles of Frank Dieselwang. You can usually find him wandering around San Francisco briefly after work hours, or in the East Bay, often near a grill or in front of a stovetop.