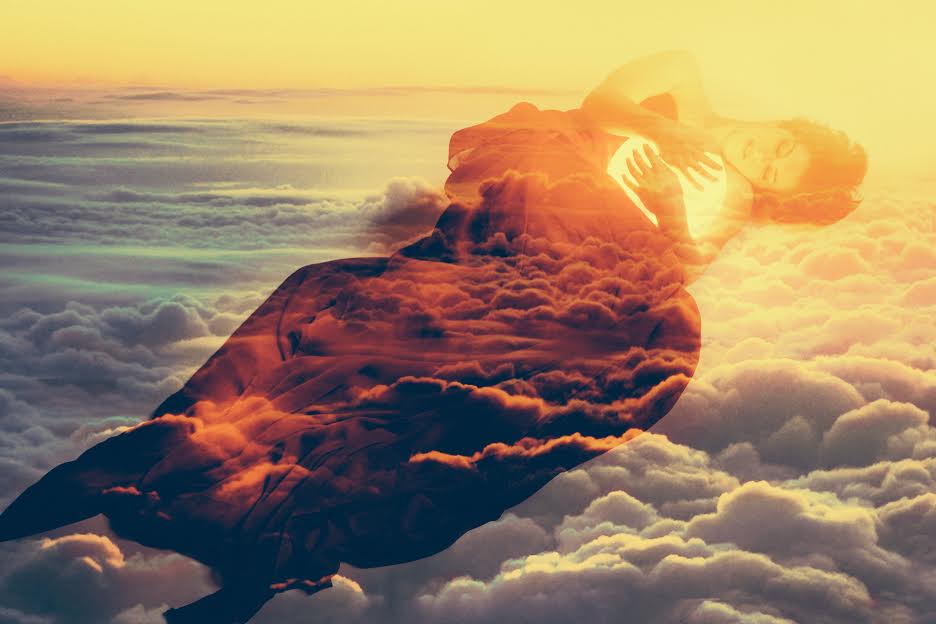 Just last month I had the exceptionally unique pleasure of interviewing Elena Kulikova, a photographer who reworks her photos through physical manipulation, paints and more. This was made even more special since she made the trip to my house, where we chatted before one of my feasting parties, which was great.

Elena is a wonderfully creative person, and we had a wide-ranging discussion about the kinds of subjects she preferred, her recent admission to the Mastered course with Nick Knight, and her focus on the feminine in her photography.

She’s a very talented creator with a really unique lens towards the world, and a selection of her work will be featured at the Skylark throughout November, and you should definitely stop by if you’re in the Mission!

Brian: Hi Elena, so glad you could make it here! I know you do a lot of artistic work, is photography your primary focus?

Elena Kulikova: Photography is what I do full time. Most of my commercial work is album covers, and photographing portraits of musicians and other artists.

I also sell art prints of the photographs that I play with in a multidimensional way. I want them to be more than a flat image, so sometimes I collage my own photos… sometimes I paint on them. I want to explore more of that. I also cut them up and create stop animations with them as well.

B: Ah, so it isn’t just still photography? I did see you did a lot of texture work, so I was wondering if you actually did something physical to them. It seemed like they were physically coming out of the screen.

B: When did you start to shift from flat photography to trying new physical and alterations to photos? Was it something you wanted to do from the beginning or was it something that you were inspired to do?

EK: I originally I got into photography because I was modeling at a young age, and then I started shooting more models that were my friends. I also had a modeling agency that represented me which was nice because I had the connections to access models beyond just my friends who were models, other professionals in the industry. Often what will happen when a young photographer comes to a modeling agency asking for models, they might be questioned like “who are you?” I was fortunate to have the access that I did.

What I didn’t have was access to high fashion clothing because that takes work to establish your reputation to get the contacts to build up to pull from current designers. So, I was shooting an advertisement for this cool designer but I remember the models came to my place and I just photographed them in lingerie and I just cut out clothes from fashion magazines, and I cut out clothes from fashion magazines. So what I did was make them into paper dolls, so that was the very first time that I started cutting things out. I was also interested in exploring other mediums and I remember that I started placing mirrors across from printed out photographs to create a mirrored look that was physical, rather than just Photoshop. I love that look, when things are created physically, because it has those organic imperfections and I want to do more of it.

B: That’s really great. So when you said that you had to cut out pictures of the clothing, did you actually have that in mind when you asked the models to pose in lingerie?

EK: Yeah I had to explain the idea to them, and they found it a bit awkward at first, probably thinking, “ok I’m just standing here… in my underwear, posing!” And yes, the poses were for the models fitting the clothes I had cut out.

B: So, it’s almost like a blue screen, but completely opposite at the same time.

EK: Yeah, I’m not sure how I presented the idea to the designer, but he’s a famous fashion, jeans clothing designer from Holland, and his name is Hans Ubbink, he’s cool, he’s a really nice person, and he does this book called Human and its just artists that inspire him and he… I think I modeled for him and he saw something he really liked in my photography, like the travel photography and other photos I had taken, not anything like what I have now in my main work.

He asked me if I wanted to contribute to this work that he puts out annually, and I said I’d love to! So those paper cut out dolls of the models I posed on a picture of Vondelpark in Amsterdam. I placed them on benches, and in flowers, and I think it was really great.

B: So when did you start in photography, you said it came from modeling?

EK: I started modeling when I was 17. I grew up in the Bay Area and moved to Vancouver to get away from my family, but not too far, even though I did look at some schools in Scotland. I got a scholarship in Vancouver and went there, started modeling and in a total cliché, met this photographer and we started dating, you know a model photographer relationship and it was fun.

He gave me my first film camera. It was a Holga. And I just started shooting sunsets, flowers, buildings… I didn’t think that it was what I wanted to do, but I just kept shooting. What made me fall in love with photography was that it was a manual and you have to advance the film, but since I’m a total space cadet, and not technical at all, and I’d forget to do that sometimes, and take multiple exposures, so once I got the film developed I was like whoa, what is this, this is amazing!

It’s like two realities intersecting, making this cool new image. I wanted to do more of that.

B: So it’s almost kismet how you’ve discovered this!

EK: Yeah. And then in my mind I thought I was doing this whole new thing, but then of course I discovered that other people were doing this too. And I loved it. Multiple exposures are still some of my favorites. I mean I guess it’s obvious, but they say more than the plain photo, like, a person’s face imposed on trees or something.

B: They’re pretty great. So, on a different topic, how did you and Hunny bunny connect?

E: Hunny Bunny was one of the models for a friend of mine, a make up artist who wanted to accomplish a lot of looks. We shot at the Albany Bulb, which is really cool; it looks like a … “trashland,” artistic graffiti, post apocalyptic.

We photographed there, and it turned out pretty cool. There’s this shot of Hunny Bunny, and because she’s a contortionist and she can do amazing things with her body. There’s this one shot that stood out, where she’s leaning back, with pink powder being thrown in the air, and her body is covered in these great colorful powders.

And that’s how I met Hunny.

And she inspired me, she’s very sweet, and what she can do with her body. I love dancers so I stayed in touch with her, and then she asked me to put up my photography for the show.

B: Very cool. So very importantly, what do you hope to get out of putting up your work at the Skylark?

EK: I’d love to sell some art pieces, that’s always fun because I put some investment into getting the prints and make some of that back, but it’s really fun to show my work, and hopefully inspire others and get some conversation going between whoever’s looking at it.

B: Alright Elena, it was wonderful meeting with you, thanks for coming down!

EK: Thank you so much Brian!

If you wanted to look at more of Elena’s work, you can find it on her website, Elena Kulikova Photography.

BRIAN ALSO BLOGS ON A COOK AND A GEEK, AND PUBLISHES PARODY EROTICA ON THE CHRONICLES OF FRANK DIESELWANG. YOU CAN USUALLY FIND HIM WANDERING AROUND SAN FRANCISCO BRIEFLY AFTER WORK HOURS, OR IN THE EAST BAY, OFTEN NEAR A GRILL OR IN FRONT OF A STOVETOP.