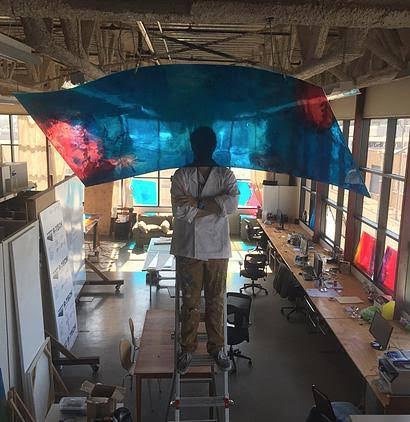 Welcome back dear burlesque fans. For this piece, we’re taking a somewhat different approach to art, by actually chatting with an artist with a different kind of medium than we usually feature on Hunny Bunny Burlesque, Nemo of Unstoppable Forces.

Nemo has been displaying his art at the Skylark, and it has been up since mid September and will remain there for the rest of October.

Brian: So Nemo, is there a theme or message you’re trying to convey with this particular collection of art?

Nemo: They are all modern day icons for states of mind. The idea was to have people to find sympathy or attachment to the states of mind and then vicariously to the people they would not have otherwise. It probably won’t work, but that’s the idea.

BV: Where did the name Nemo come from, do you prefer that name?

Nemo: Nemo means no one in Latin. I like not being anyone in particular, it gives me more freedom to do what I want without any demands on myself. I never want to be famous on a national level honestly. Local, sure.

Nemo: I would like to reach out to anyone who vibes with it. I’m not trying to change the world, and it would be irresponsible of me to try. I am not a marriage counselor, so I don’t do that, even for friends, same with my role in art. I don’t know what’s best for people, so I just make things for people and places. My narrative of course gets caught up into it because that is the filter I view the world from, but yeah.

BV: How has it been going since you’ve installed at Skylark?

Nemo: The painting is going well, one or two is sold come the end of the show. Laughs Which is nice.

BV: Glad that you sold a few though!

Have you received more attention since your paintings went up?

Nemo: Yes, I’ve had a decent amount of people checking out the website and Facebook feeds. The work is very popular. What don’t sell I will be making hand carved frames for in the next few months.

Nemo: Well, I started carving wood after I moved back from Mexico. The Oaxacan woodcarvings were the most beautiful thing I had ever seen, and I wanted to make wooden hipsters in the same style. I then started integrating carving into making crazy frames when I was working as a foam carver for a local prop shop.

BV: Do you take instruction or suggestions from people mid work?

Nemo: I do often. The work for me is cathartic, and I enjoy making things. If there is something I can do that would make the owner of a piece more connected to it, then even better. There is a portrait in Davis of a group of people at a picnic that I have painted no less than three people out of and replaced them with friends because of personal difference between the people and the owner of the piece.

Her family always says not to piss her off or she’ll have you painted out of her life. Laughs

So what inspires your work, do you do anything specific when you’re trying to create something?

Nemo: Emotions inspire my work most frequently. They come out in strange ways, and as strange subject matter. But that’s what the paintings are always, just interpreted through my odd lens.

Nemo: I’ve been an artist my whole life I suppose. My mother was a single mother that couldn’t afford daycare and would leave me home alone drawing. I also moved around a lot as a kid, so consistent friends weren’t an option but art was always there.

It’s always been my dream to be an artist.

BV: What was the painting of, and may I ask whom you sold it to? You can describe it in generalities

Nemo: 4×8′ painting of a field of sunflower was commissioned by a lady. I spent 3 months painting the shit out of this thing and made 300$. After that, I really didn’t like sunflowers. Couldn’t look at them

Then she commissioned a second on. Laughs

BV: Haha. Could someone ask you for sunflowers now, or would you reject it outright?

Nemo: I would do it for sure. It’s not about me or my ego.

Anything you want to say to aspiring artists in the bay area?

Nemo: Don’t give up. Art is just a horse race with no finish line. Investors and curators don’t want to invest in artists who won’t be around in two years time because they gave up on the dream.

They want artists who create work because they have to. That’s what an artist is.

BV: Alright, thanks Nemo! Have a link for me to share with people?

Everything there is mine

Remember, some of Nemo’s work is currently installed at the Skylark, so take a look if you’re in the Mission. If that’s a bit of a trek, you can find Nemo’s work on his website here.

Brian also blogs on A Cook and a Geek, and publishes parody erotica on The Chronicles of Frank Dieselwang. You can usually find him wandering around San Francisco briefly after work hours, or in the East Bay, often near a grill or in front of a stovetop.