Home/Blog/August feature: Jordan, Bartender Extraordinaire at the Skylark!
Previous Next 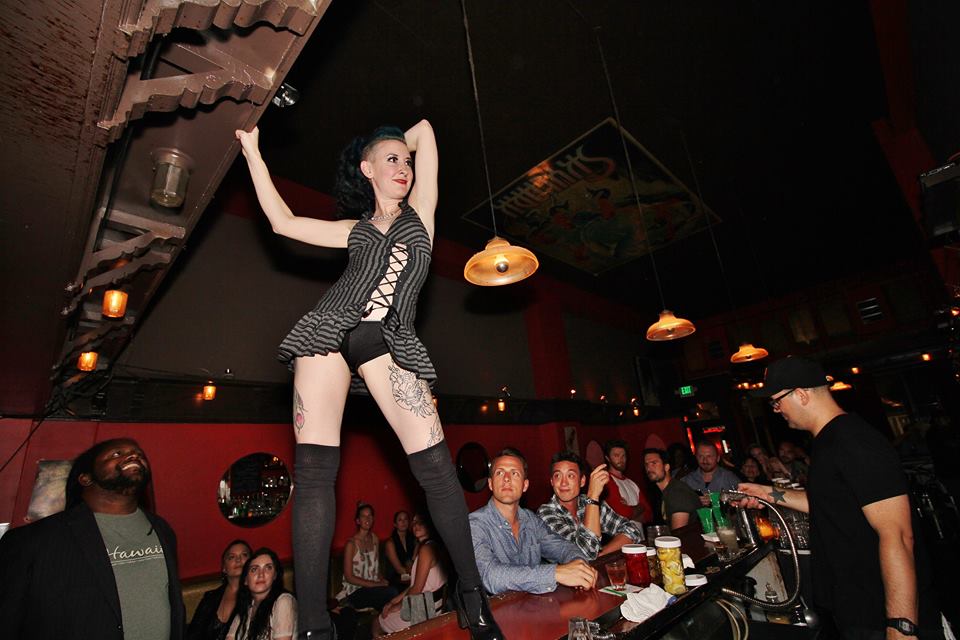 We’re doing things a bit different this August, and taking a look not at the stage, but behind the bar. What’s a bar without someone to tend it?

So a few week’s past I had the opportunity to sit down with Jordan, one of the bartenders at the Skylark. I was able to turn the tables and make him a cocktail for once (which he approved of!) and then we got to talking.

Brian: This is Brian and I’m lucky to be sitting with Jordan, one of the bartenders of the S​kylark B​ar who is usually running the scenes behind the bar during the nights that Hunny Bunny and her Hot Toddies are performing.

Jordan: Good to be here Brian.

​B:​ So let’s talk about home base of the Skylark, where I like to spend most of my Fridays, not just because of the acts, but also because of your charming company and good drinks.

B: So,  has Hunny Bunny been a recent addition at the Skylark?

J: Hunny Bunny and her hot toddies have been doing a monthly for many years and I’m pretty sure it was going on …

B: Before you got back?

J: Yes well before I got back from Austin. Jeffrey had Fridays before I got back, good friend of mine, it was going on a few years I think. I don’t know exactly when but it’s been a tradition.

B: Has it always been…. when it was monthly was it a nice break from the usual Fridays? Does the crowd change you would say?

J: 16th and Valencia is such a crossroads, you never quite know what’s going to happen, some dancers will have a draw, sometimes a bunch of people come to see the show, sometimes it’s just sort of happening and it becomes a part of the fun of the Skylark. But it’s good to see regulars such as you and others come to the show every week. It’s nice to see a core group there.

B: How many regulars are there? I’m not there every week so I don’t quite know myself.

J: I think there are 10 that are there almost every week, and there’s sort of a rotating cast of familiar​ faces.

B: In the challenges of being a bartender, what are the non-obvious problems?

Non obvious problem, people will ask me, what do I want to drink? And if I don’t know them it’s kind of hard, it becomes a Q&A, I interview them, “What did they have for lunch?” What might be on their palate, kind of an oddball technique I use. It’s interesting when people want me to craft them a drink, and I’m happy to, but you know, some people hate rum, some people only want vodka.

I’ve actually put together a drink menu for happy hour with suggested cocktails. Feedback has been very positive, especially for the Hunny Bunny- vodka, lemon, Chambord and ginger beer.

B: So if someone comes in and wants you to craft a drink for them, what are some of the good baselines  for them to give you? Liquor preferences?

J: Gimlet is easy to do, fresh lime juice, easy to do with gin or​ vodka.

I make quite a M​ai T​ai. rum, lime juice, pineapple, a variation on the theme.

B: Are are you able to make a M​ai T​ai at the skylark?

J: Absolutely. keep a bottle of Orgeat behind the bar just for Mai Tais.

B: Yeah, I wasn’t sure, because don’t a lot of tiki drinks have fresh fruit in them?

J:  I use fresh lemon and lime juices.  The other juices, you generally don’t see fresh, maybe grapefruit at some bars, but passionfruit, pineapple, all that stuff is going to come in a can.

B: Alright, guess I’ll have to get ​a Mai Tai ​the next time I’m there.

B: What’s more fun for you to serve or better for you behind the bar? Just crank beers out? More involved drinks?

J: I love crafting a good cocktail, the industry has changed so much, a lot of bars have pretty extensive cocktail programs, for example Dalva up the street, their hideout that they have, lots of interesting cutting age foodie sorts of drinks. Skylark is more minimalist, but it’s been fun working to update the menu. It’s easy for me to crank out a beer and a shot, I don’t really mind making a manhattan, some bartenders get surly if someone orders a manhattan or a martini, and I feel like that’s par for the course. You’re never too busy to make something like that. I mean, we have no mint, so mojito’s are off the table, those are pretty time consuming, but generally I’m happy to mix it up and put together the right selection of drinks for people. We do our best.

B: Alright, let’s do this. I’ll name a drink and you give me your immediate thoughts. Not a quiz, just your thoughts on it.

J: Good for Summertime: Having a drink in your hand right away. Yeah, it’s a classic.

J: Rye or Bourbon. That’s my thought, do they want rye or bourbon, because rye is a classic, but a lot of people order bourbon these days.

B: The Moscow mule?

J: Once again it’s easy, it’s good to see it make a comeback.

J: Friday night. *laughs* the AMF …​ we make more of that. It’s a good value if you’re into that sort of thing! I make a lot of them Friday and Saturday night.

B: Do you have any theory as to why it all works so well? Why do the flavors balance out so well?

J: That’s an interesting question. I think the rum and the tequila are duking it out the most. There’s some cancellation of the predominant flavors of the liquors. Generally most of the glass will be full of liquor, maybe a bit of sour, fresh lime, cola. But it is interesting.

B: Did you have any inspirations as a bartender?

J: I had a bartending mentor, not formally, but um I used to be a regular at the Orbit Room, way back, early 2000s, before mixology was even a thing. Alberta Straub was her name, was there for years, apparently Pepsi offered her a bunch of money to craft a drink. I don’t know what happened after that. She’s just an amazing personality. Not the fastest bartender, but she’d make the most amazing drinks. She would make the drink that you wanted, not the one that your ordered. I don’t have that skill yet. I rarely try to play that card.

For example I’d ask for a gin and tonic and she’d muddle watermelon, and cucumber and use a dutch gin, and go crazy with it, sometimes use a completely different base spirit, it was always … you never knew what you were going to get, but it would always be exactly what I needed. It was like she was reading my mind and making the drink that made my day all better.

B: Wow, is she still around?

J: No, she was a celebrity bartender for a while, not sure where she is now …. it was like 12 years ago. But seeing someone like that behind a bar was really an inspiration to me early in my career.

B: So… back to the performers. When you came back, when was it that you finally met Hunny?

J: I had met her in the past in passing, but when Jeffrey asked me to take over his Friday I knew that Hunny Bunny and her Hot Toddies were a monthly, so I was happy to see them back for their run that first Friday. They really bring something to the bar, it’s a really cool bit of San Francisco. Skylark, first of all is neighborhood bar. It’s a sports bar, it’s a night club. It does a lot of things but to bring in a bit of transgressive San Francisco shenanigans, it is a good cultural outreach. It’s good for broadening our base.

You think the shows have change a bit over the years?

It’s an ever evolving performance. One thing I regret is that I don’t get to see a lot of the show. I’m fairly busy making drinks, so I’m fairly lucky when I can watch maybe half of someone’s dance.

I was going to ask if you had any particular favorites or memorable moments, maybe a quiet night?

A lot of the dancers really stand out. Suzil, we miss Suzil, she brings a lot of energy to her performances. Hunny Bunny is really an incredible performer. Her routine with the giant fan is awesome. I don’t know if the contortion is something new for her, but I’ve seen some really amazing bends and twists. General May is such a stunning bellydancer, always gets the crowd worked up. Prince Xzist is amazing.

B: Strange to be saying as a heterosexual man, but [Xsist] is a phenomenal performer and I love seeing him.

J: *loud laugh* I had no idea what I was seeing the first time he performed but um, amazing guy. Really interesting DJ. Really nice guy. I run into him around town. The Mission district mostly.

B: Now, I know as a bartender you don’t get to see that much of the show, but from your perspective, why would you recommend that people should hop into the Skylark to see the show, for drink and or performance on Friday night?

J: It’s a one of a kind experience. The Skylark has been there for almost 20 years, as the Skylark, so you’re getting a real piece of the old Mission District. Kilowatt is still going, Delirium, the neighborhood is changing for many different reasons, and Skylark is still the Skylark, and being able to see a No Cover Cabaret show, drink a fabulous cocktail crafted by yours truly.

B:  One last question: So, someone is going to a burlesque performance what kind of drink should they get to pair with the experience of the performance?

J: It’s a real cool, retro thing, I don’t know a lot about the history but my impression is that it’s a mid century sort of performance, maybe back to vaudeville, so, classic cocktails I think are in order. And I do make more classic cocktails during a performance. Martinis, Manhattans, Old Fashioneds. Also, I finally was able to add a couple bottles to the bar for mixing:  Green Chartreuse and Luxardo Maraschino- So a Last Word or and Avaition would be just right

The old fashioned is huge right now, also the Moscow Mule. In my bartending career I didn’t really make any until a year ago except for the odd request. Anything you’d see on Mad Men would be correct. There’s no right drink, but I think a Rye Manhattan would be good for burlesque. Maybe two or three.

You can see Jordan at the Skylark, not only during the Hunny Bunny and her Hot Toddies Show which is very Friday night, but also happy hours Tuesdays, Thursdays, and Fridays, and Saturday nights as well.